Feast of the Motherhood of the Blessed Virgin Mary

These are some of the readings from the Office of Matins for this feast, which is celebrated on October 11 in the "old" calendar. It seems to me that we have lost so much by the revision of the calendar which omits so many feasts! By celebrating our saints during the week, as well as on Sundays, we keep our hearts and minds on the things of God; it’s a reminder that the things of the world are fleeting and superficial, and that our true home is Heaven.

From the Acts of Pope Pius XI

In the year 1931, amid the applause of the whole Catholic world, solemn rites were celebrated to mark the completion of the fifteen centuries which had elapsed since the Council of Ephesus, moving against the Nestorian heresy, had acclaimed the Blessed Virgin Mary, of whom Jesus was born, as Mother of God. This acclamation had been made by the Fathers of the Church under the leadership of Pope Celestine. Pius XI, as Supreme Pontiff, wished to commemorate the notable event and to give lasting proof of his devotion to Mary.

Now, there had existed for many years in Rome a grand memorial to the proclamation of Ephesus, the triumphal arch in the basilica of Saint Mary Major on the Esquiline Hill. This monument had already been adorned by a previous pontiff, Sixtus III, with mosaics of marvelous workmanship, now falling to pieces from the decay of the passing ages. Pius XI, therefore, out of his own munificence, caused these to be restored most exquisitely and with them the transept of the basilica. In an Encyclical Letter Pius set forth also the true history of the Council of Ephesus, and expounded fervently and at great length the doctrine of the prerogatives of the Blessed Virgin Mary as Mother of God. He did this that the doctrine of this lofty mystery might sink more deeply into the hearts of the faithful. In it he set forth Mary, the Mother of God, blessed among women, and the most holy Family of Nazareth as the exemplars to be followed above all others, as models of the dignity and holiness of chaste wedlock, as patterns of the holy education to be given youth.

Finally that no liturgical detail be lacking, he decreed that the feast of the Divine Motherhood of the Blessed Virgin Mary be celebrated annually on the 11th day of October by the universal Church with a proper Mass and Office under the rite of a double of the second class. 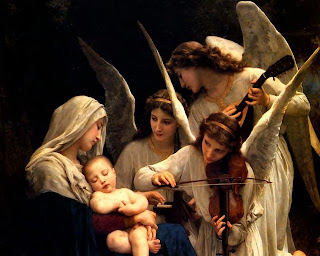 A Homily of St. Bernard the Abbot
Homilia 1. de Laud. Virg. Matris
“Son, why hast thou thus dealt with us?” Mary called God, the Lord of Angels, her son.  Which of the angels would have dared to do so? It is enough for them, and they reckon it is a great thing, that, being naturally spirits, they should receive the grace of being made and called angels, as witness David: “Who maketh spirits his angels.”

But Mary, knowing herself to be his Mother, doth boldly apply the word Son to that Majesty whom the angels do serve with awe; neither doth God despise to be called what he hath made himself. For a little after, the Evangelist saith: “And he was subject unto them.” Who to whom? God to men. I say that God, unto whom the angels are subject, and who is obeyed by the Principalities and Powers, was subject to Mary.

Marvel thou at both these things, and choose whether to marvel most at the sublime condescension of the Son, or at the sublime dignity of Mary. Either is amazing, either marvelous. That God should obey this woman is a lowliness without parallel; that this woman should rule over God, an exaltation without match.

In praise of virgins, and of virgins only, is it sung that “These are they which follow the Lamb whithersoever he goeth”. Of what praise, then, thinkest thou that she must be worthy who even leadeth the Lamb? O man, learn to obey. O earth, learn to submit. O dust, learn to keep down. It is of thy Maker that the Evangelist saith: “And he was subject unto them.” Blush, O proud ashes. God humbleth himself; and dost thou exalt thyself? God is subject unto men; and wilt thou, by striving to rule over men, set thyself before thy Maker?

But indeed more marvelous than any one of these things is the combination of them all, and without all comparison, it is more excellent and more blessed to have received them all, than to have received any one of them alone. What wonder is it that God, of whom we see and read, that He is wonderful in his holy places, should have shown himself wonderful in his Mother? O ye that be married, honor this incorruption in corruptible flesh; O holy maidens, gaze in wonder at motherhood in a maid; O, all mankind, take pattern by the lowliness of the Mother of God.
at 9:43 AM

Email ThisBlogThis!Share to TwitterShare to FacebookShare to Pinterest
Labels: Motherhood of the Blessed Virgin Mary