It's a day late, but here is Fr. Eric Andersen's homily for the Feast of St. Joseph the Worker.

“When the American Federation of Labor decided to set May 1st, 1886, as the target date for winning the eight-hour day, which it had been demanding for years, the only thing in favor of the first of May was that it was moving day, the usual date when leases and other economic agreements ran out. …The employers opposed the demand, and so a strike was called for that day. At a demonstration in Chicago a bomb was thrown – by whom was never known. The police fired into the crowd, killing and wounding several of the demonstrators. The labor leaders charged with instigating the demonstrations were tried in an atmosphere of hatred and hysteria; seven were sentenced to death and four executed. In memory of these martyrs of the labor movement, the first of May was adopted internationally as a day given over to demonstrating for shorter working hours. Only five years later did the International Labor Congress in Brussels declare it a “festival day” for the first time” (Josef Pieper, In Tune with the World, 73). 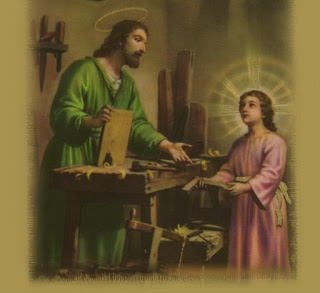 The “posters and banners carried in the processions” proclaimed: “This is the day the people made; it is hallowed throughout the world”; “Socialism, thy kingdom come!”; “Our Pentecost, when the power of the Holy Spirit of Socialism rushes through the world, making converts” (Pieper, 75).

What started as an American Labor dispute became a Socialist festival and then when the Bolshevists took over the celebration, it was no longer a “demonstration against the existing order. The existing order (became) identical with the dictatorship of the…totalitarian labor state” (75). The Catholic philosopher Josef Pieper points out that “The first of May becomes, to put it briefly, a day that differs from all other workdays and rest days of the year in that it is celebrated by – additional, voluntary, unpaid work! In lieu of the demand for a shorter workday, which in the past had been the justification and the meaning of the day, the workers are asked to accept the very opposite, ‘the idea of a prolongation of work.’” The Bolshevist Leon Trotsky is quoted from an official document of 1920: “This holiday is one of general work.” From the same document Maxim Gorky wrote: “It is a wonderful idea to make the spring festival of the workers a holiday of voluntary work” (cf. Pieper 76). Lenin’s government decreed that it was a “‘crime not to understand’ the purpose of giving that particular form to the holiday” (cf. 76).

By 1922, “May first became more and more exclusively a day on which the Soviet Union displayed its military strength in gigantic parades. …The very same was true of the gigantic May Day celebrations of the Nazi regime” (77). “Several days prior to May first, the state propaganda machine would publish the following instructions: ‘Decorate your houses and the streets of the cities and villages with fresh greenery and with the colors of the Reich! …No train and no streetcar is to ride through Germany that is not decorated with flowers and greenery!” (78). In 1934 May 1st was renamed “National Holiday of the German People” and was “the prime occasion for striking displays of weapons of destruction, which the regime was already accumulating in preparation for total war" (Pieper, 79).

In 1937, Pope Pius XI issued an encyclical Divini Redemptoris on atheistic communism, writing: “We place the vast campaign of the Church against world Communism under the standard of Saint Joseph, her mighty Protector. He belongs to the working class…and in a life of faithful performance of everyday duties, he left an example for all those who must gain their bread by the toil of their hands” (cf. §§ 44, 45).

At that time, the Catholic Church celebrated the feast of Sts. Philip and James, apostles, on May 1st. There was a moveable Solemnity of St. Joseph, Spouse of the Blessed Virgin Mary and Patron of the Universal Church celebrated on the Wednesday of the third week after Easter. In 1955, Pope Pius XII rearranged the liturgical calendar and moved this feast of St. Joseph to a set date: May 1st, in honor of St. Joseph the Worker. It is odd, therefore, that the Catholic Worker movement appears to lean more towards protest and activism than towards the sanctification of work and the imitation of St. Joseph the worker. The Dominican Fr. Marie Dominique Philippe reminds us, our Lord said, “Do not labor for the food which perishes [for the pagan does as much] but for the food which endures to eternal life, which the Son of Man will give to you” (Jn 6:27). Fr. Philippe writes that St. Joseph “did not work in order to become a specialist, or to win a prize, or again for human glory. He worked for the sole reason that God asked him to; he worked in order to fulfill His will. Obedience to God, and the fact of being predominantly concerned with doing His will, gives gentleness to our work. We do not waste time, and we work without stress or fuss” (The Mystery of Joseph, 50). He relates St. Joseph’s work to the contemplative life: “Our desire for contemplation gives us an interior freedom which allows us to work in truth and with determination, thereby making a total gift of all our strength, and offering our work to God as a holocaust of love” (52).

Fr. Philippe continues: “When work is accomplished in simply the human, natural perspective, we have a specific goal in mind, which remains on the human plane, and we become attached to our work. In religious life we discover that it takes a long time for work, and for our way of working, to become purified. It is not something that is done in a day, nor even a year; it takes a lifetime, because it is the whole reality of our human person that is involved in work – including our sensibility, our emotions…, our imagination, our intelligence and our will to apply ourselves to what we do” (52).

Now we see a great difference between the work of a communist and the work of a saint. Today, May 1st, is a day that belongs to the Lord. It is not a day that the people have made. It is not a day to celebrate the achievements of man or his military strength. Neither is it a day for protest and dissent and demonstrations. It is a day to consecrate our work, and to do it well for the glory of God. This is the day the Lord has made. Let us rejoice and be glad in it.