This is a report from the President of the Society of St. Gregory the Great, Stephanie Swee, on her attendance at the Sacred Music Colloquium, which took place in Salt Lake City, Utah, June 17-23. 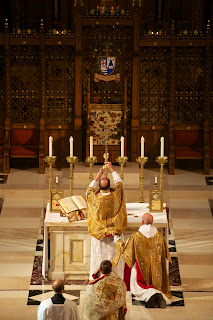 It felt very much like coming home, not only because of the venue, but because there were some familiar faces among the more than 200 who gathered: some of the staff of CMAA whom I had gotten to know previously, some clergy, such as Father Johannes of the Gray Franciscans, and Father Pasley, the chaplain of CMAA, who is pastor of the only diocesan parish in the country dedicated to the extraordinary form of the liturgy.

In addition, there were five other Oregon residents there, besides the two of us who came from Central Oregon. Father Eric Andersen, until recently pastor at Sacred Heart in Gervais and his choir director Jeannine; Father Luan Tran, pastor of St. Birgitta’s parish in Portland and his choir director, a young man whose name I never ascertained; and a gentleman from Otter Rock on the coast, whom I met once at the opening dinner and never saw the rest of the week.

Initially, SLC was characteristically hot. After enduring a Mass the first night in the choir school chapel (no air conditioning) with outside temps of 109 degrees, we were grateful for highs in the mid-80s the rest of the week, and most classrooms and the cathedral were mercifully cooled.  Once I was in the cathedral itself, however, everything seemed very familiar and comfortable. The structure, with its incredible frescos, stained glass, and massive organ is perhaps as close as one gets in the U.S. to the great cathedrals of Europe.
The choir stalls provided a lot of seating for some of the schola groups, and the choir loft and screened area behind the altar accommodated other singers. The acoustics are very good in most areas and that made singing more satisfying than it is in more dampened new churches, where carpet and ceiling tiles often absorb much of the sound.

As last year, there were six liturgies planned: two EF and four OF Masses. Most of the priests – more than a dozen of them attending – concelebrated the OF Masses, and the choir school chapel was available for those needing to say private Masses. I suspect most did that in the early morning, so as to avoid being cooked and/or dehydrated.

The Masses were structured for the weekdays so as to begin with English OF Masses, first with the New English Propers – amazingly simple in the context – and then with Latin propers, more complex but very do-able by any choir willing to put in the time. Despite the fact that I looked forward to the two Solemn High EF Masses on Thursday and Friday, I found the two preceding Novus Ordo Masses very edifying. They were a great improvement over how most such Masses are celebrated in my local diocese. The music, of course, was key, as chant in both languages and sacred polyphony accompanied the action of the liturgy.

After a late start due to a failed alarm the first morning, I decided to rejoin my previous schola director, Jeffrey Morse, currently choirmaster at St. Stephen’s Church, a Fraternity of St. Peter parish in Sacramento , CA. Even though the level of chant preparation was down from the advanced schola, we had five or six men who were very good cantors and who did all the intoning and psalm verses. In addition, since we had less ambitious participants content to rehearse, Jeffery was able to give us instruction in semiology, the applying of ancient text and markings to interpreting the chants. Although we stayed with the general reforms of Solesmes for the chant, some nuances were added here and there based on more recent scholarship.

Wednesday was a day for one of the highlights of the week. Archbishop Alexander Sample, newly installed as archbishop of the Portland archdiocese and metropolitan for the states of Oregon, Idaho, and Montana, visited for the day and gave a talk that brought tears to the eyes of many  colloquium participants. He thanked the CMAA for continuing to carry the torch for good sacred music and pledged to do all in his power to further those efforts. One of the priests there said to me afterwards that he had never expected in his lifetime to hear a member of the hierarchy say those things. The gratification and gratitude on the part of every participant was immense. 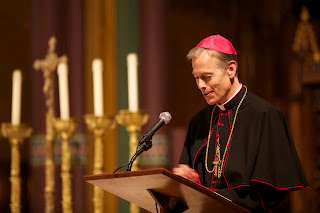 That evening Archbishop Sample celebrated an OF Mass ad orientem and with some Latin chants. It occurred to me – and others, as it turned out – that he is cut from the same cloth as was the Venerable Fulton Sheen. Both have charismatic qualities and both are dignified in their bearing and courageous in their attitude toward the faith. In Archbishop Sample’s case, this includes especially the restoration of the sacred in liturgy and music, which has lain in ruins for so long. It was a note of hope and optimism sorely needed in the Church.

Thursday brought the first EF Mass, the traditional Solemn Requiem for deceased members of CMAA. Monsignor Richard Schuler is always remembered by name, for his incredible contribution to the cause of sacred music. For nearly four decades he conducted Masses by Mozart, Haydn and other composers and used Gregorian chant at many Masses at the Church of St. Agnes in St. Paul, Minnesota. His legacy lives on in the Twin Cities Catholic Chorale and CMAA will have a special workshop there in October.

On Friday, we celebrated the feast of the young Jesuit, Aloysius Gonzaga, with another solemn high Mass, led by Father Pasley as celebrant. On Saturday, the 2 p.m. Mass was an OF Mass in Latin in honor of Our Lady. The group I was singing with did the beautiful Salve Sancta Parens Introit.

The colloquium wound up Sunday morning celebrating the regular 11 a.m. parish Mass at the cathedral with the pastor, Mgsr. Mayo, as celebrant. After Mass the entire group sang a new composition, Laudate Dominum, selected from several pieces of sacred music submitted for judging.

At the closing brunch, Jeffrey Tucker, editor of CMAA’s publication Sacred Music, made a few remarks. A man not known for his brevity, Tucker said that words had failed him in describing the experience of the colloquium. He opined that the bonding felt among participants would continue throughout the year and that the staff was happy to be in touch with any and all.

Father Pasley, though, said something that struck a particular chord with me. He thanked all the participants for their rendering of the sacred music and its contribution to the liturgies that week. He told us that our efforts had made the clergy better priests and that at times, he felt chills on hearing the beautiful sounds that befit  the Sacrifice of the Mass done properly. 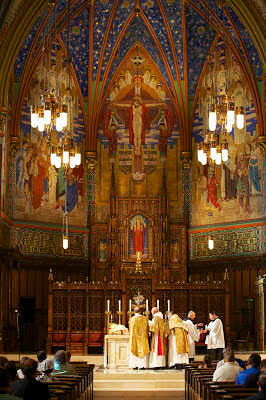 Next year the colloquium will be held in Indianapolis, Indiana, much farther east. I hope to be there, but it is a long way out to plan. What I did get from some of the staff is that they are considering Portland as a venue in the next few years. Between the friendship of Archbishop Sample and the more temperate climate, that would be very happy event.   Meanwhile, there are signs of progress in Oregon and perhaps some of the wonderful liturgy that happened in Salt Lake City this summer will be echoed around our state over the next months of 2013.


If anyone wants more information about CMAA or its activities, including the last colloquium, please e-mail me at: swee0574@gmail.com.
at 9:11 PM