In this section of the sermon, St. John Chrysostom gives some pointed counsel to his priests and deacons on the question of administering Holy Communion to those who are obviously unworthy of it. Today's prelates might do well sit up and take notice.

Except for the italicized Scripture verses, the italics are mine, added for emphasis.

The Eucharist: The Memorial of Christ’s Passion

… Think how strong is your own anger against His betrayer, against those who crucified Him. Take care lest you yourself should become guilty of the Body and Blood of Christ. They put that Sacred Body to death; but you, and this after so many kindnesses received from Him, receive this Body into an evil soul. It was not enough that He became man, that He was struck in the face, that He was slaughtered, but He also commingles Himself with us; and this not alone through faith. He has in very deed made us His own Body. Who should be more free from sin than one who partakes of such a sacrifice? As spotless as the sunbeam should be the hand that breaks that Body, the mouth that is to be filled with this spiritual Fire, the tongue that is stained by this awesome Blood! Consider with what honor you have been honored; at what Table you feast. That which the Angels tremble to behold, and dare not gaze upon because of Its flashing brightness. It is with This we are nourished, to This we are joined; made one Body and One Flesh with Christ.
…

Let us then not hold this honor lightly: we who have been held worthy of such honor. You see how eager infants are for the maternal breast, how thirstily they drink from it? Let us with a like eagerness approach this Table, and to the breast of the Spiritual Chalice. Let us with even more eagerness drink deep, like infants at the breast, of the love of the Spirit; and let it be our one grief that we should be deprived of this Food. These gifts set before us do not come from human power. He Who then made them at that Supper, the Same now makes what is here before us. We who minister, hold but the place of servants; it is He who consecrates, He who changes them.

Therefore let there be no Judas present; no lover of silver. If there be any one who is not a disciple, let him withdraw; the Table does not receive such as these. For He says: I make the Pasch with my disciples. And This is the same Table, and upon it there is no less than there was upon That. It is not as though Christ had wrought at that Table, and man at This. It is He has prepared this Table also. This church is that Upper Room where they then were; it was from here they went forth to the Mount of Olives. Let us go forth, to the hands of the poor; for there is the Mount of Olives: the multitude of the poor are as olive trees planted in the House of God, from which drops the oil that is profitable to us Above; which five virgins had, and the five others who had it not perished for want of it. Having it, we too may enter in, so that with our lamps burning brightly we may draw near to the Bridegroom. Receiving it let us go forth from here. Let no one who is inhuman be present, no one who is cruel and without mercy, no one at all that is unclean.

What I am saying, I say to you also who minister, as well as to those who are ministered to. For it is necessary that I also address myself to you; that you may distribute the sacred gifts with great caution. For your punishment is not light should you, knowingly, admit anyone to the Communion of this Table whom you know to be unworthy of it. His blood will be required at thy hand (Ezech. 33:8). And even though he were a general, or a governor, or even he who wears the crown, should he draw near unworthy, forbid him: for higher is your authority than his. For if a spring of pure water were placed in your care for your flock, and you saw a sheep coming, with its mouth smeared with mud, you would not let it put down its mouth to dirty the well. Now you have been given charge of a well, not of water, but of Blood and the Spirit; and should you see someone draw near who is soiled with sin, a more grievous thing than clay or mud, and you are not moved to wrath, and you do not drive him away, how do you deserve to be forgiven? It was for this God honored you with this dignity: that you might exercise judgment in these things. This is your office; this is your own security; this is your whole crown: not that you may go about clothed in a shining white habit.

And how, you may ask me, can I know about this person or that person? I am not speaking of those you do not know, but of those you do know. And shall I say something more serious? it is not as dreadful to be possessed by evil Spirits, such as those of whom Paul speaks, as to tread Christ under foot, and to hold the blood of the testament unclean, and offer an affront to the Spirit of grace (Heb. 10:29). He who has sinned, and comes to Holy Communion, is lower than one possessed by a demon. For those who are afflicted by an evil spirit are not on that account punished. But these others, should they come, unworthy, to the altar, they are handed over to everlasting punishment. 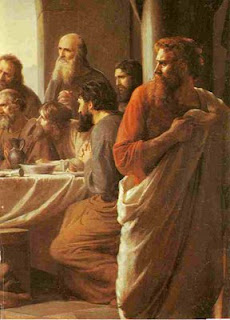 Let us drive away not these only, but all without exception whom we see draw near who are unworthy. Let no Judas receive, lest he suffer as Judas did. This Gathering is also the Body of Christ. Watch therefore, you who fulfill the office of deacon in these Sacred Mysteries, that you do not provoke the anger of the Lord by not purifying His Body: that you do not give a sword in place of food. And though such a one should approach the altar out of ignorance, exclude him, and be unafraid. Be in fear of God, not of man. For if you fear a man, you will be laughed at, even by him. But if you fear God, you will have the respect of men. Yet, if you do not dare to do this, then bring them to me. I shall not suffer that this be even attempted. I would lay down my life first, before I would present the Lord’s Blood to one who was unworthy of It; and pour out my own blood rather than give this Fearful Blood contrary to what is fitting.

But if you do not know who is unworthy, though exercising much care, then there is no fault on your part. For what I am saying is about those who are well known. If we correct those, God will soon disclose those we do not know. But if we do not disturb those who are known to be unworthy, why should God make the others known to us? I say these things to you, not to drive these away, not simply to cut them off, but that we may lead them to do what is right, that we may take care of them. For by doing this God will be gracious to us, and we shall find many who will then receive worthily. And for our own zeal, and because of our care for the souls of others, our reward shall be very great.

And to this may we all attain, by the grace and mercy of our Lord Jesus Christ, to Whom be honor and glory forever and ever. Amen.