Today I attended a “memorial” Mass for Fr. Daniel Ochiabuto, SMMM (Congregation of Sons of Mary, Mother of Mercy). A funeral Mass and burial took place in Nigeria on June 22, 2012; today’s Mass was a commemoration of Fr. Daniel’s death by the parishioners of St. Bridget of Kildare Church in Nyssa, Oregon, who had been served by Fr. Daniel for a year in his capacity as a missionary priest to the Diocese of Baker.
Bishop Liam Cary presided at today’s Mass, and that was a little unusual for the Nyssa parish. Nyssa is a little town of about 3500 people in Eastern Oregon, near the Idaho border; one parishioner told me that she has lived there since 1995 and remembers a bishop visiting the parish only twice.

In addition, about 17 priests, one deacon, and three nuns traveled various distances to be at the Mass. 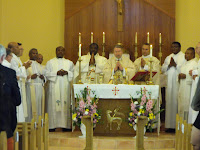 St. Bridget church is small – it’s one of a number of “mission churches” built in Oregon in the 1900’s – and this one was actually completed in 1958. You can view some photos here. The church does have a little choir loft which is actually used! There’s also a “cry room”, which was also in active use by a number of young moms with their babies.

After the procession, Bishop Cary gave a few words of explanation before he led the congregation in the daytime prayer of the Office of the Dead. He noted that reciting this prayer of the Church would enhance our prayers for Fr. Daniel.

During his homily, Bishop Cary noted that a funeral with the body present had been held in Nigeria a week previous, but suggested that because “the altar of sacrifice is present in all time”, we could consider ourselves there during this Mass, since our intention was to be joined in prayer to those who did so last week. 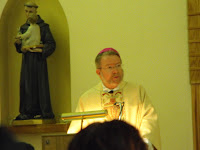 Bishop Cary described what the rite would look like if the body were present, noting that the funeral liturgy pays particular reverence to the body, because it is the image of God. During a funeral Mass, the casket is sprinkled with holy water, recalling the person’s baptism; the procession to the altar, Bishop Cary said, may remind us of the individual’s “journey through life” – he is baptized and then begins the journey towards death that leads to eternal life. At the end of a funeral Mass, the body (casket) is incensed, and the smoke of the incense represents our prayers ascending to God. Left below is the fragrance of the incense, reminding us of the good we experienced in the deceased.

Finally, at a funeral Mass, there is the burial at the cemetery. There, said Bishop Cary, we can remember the words of the Gospel read today (John 11:17-27; the death of Lazarus): “Your brother will rise.” His death has been conquered.

But this Mass, the bishop reminded us, was for a priest. A priest’s body is different, special; the priest has been anointed for a special work of God – “especially his hands,” said Bishop Cary. “St. Thomas tells us that the sacraments are the prolongation of the hands of Christ.
The priests hands are anointed, consecrated, set apart to do God’s work.” 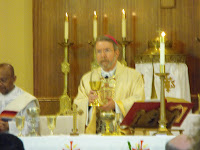 And of course, those priestly, anointed hands to a most important work when they offer the Holy Sacrifice of the Mass.

“Jesus hands the bread of life and the cup of salvation to his disciples. How many received the bread of life from Fr. Daniel?” said Bishop Cary. “We are here to reverence that and honor his work. At a funeral, it’s clear that bodily life has come to death. But with eyes of faith, we see that ‘your brother will rise’.”

Fr. Daniel served as associate pastor at Our Lady of the Valley Church in La Grande, Oregon, and in January 2011 he was made pastor of St. Bridget of Kildare in Nyssa.

Fr. Daniel became seriously ill with malaria in March 2012; he had been home for a visit, and returned to Oregon where it became apparent that he had not recovered. St. Bridget parishioners covered the cost of his return to Nigeria for treatment.  Tragically, Fr. Daniel was struck by a vehicle in Umuahia, Nigeria in late May, and died from his injuries on June 1, 2012 at the age of 39.
at 7:24 PM