Sunday, July 1, was the Big Day: Bishop Cary, ordained bishop of the Diocese of Baker on May 18, 2012, made his first visit to St. Francis de Sales Cathedral in Baker City, Oregon! 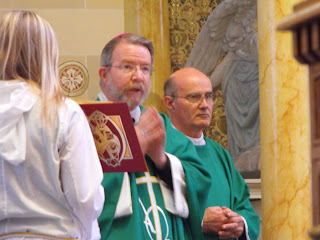 The Mass was preceded by Bishop Cary knocking on the door of the Cathedral and being received by Fr. Julian Cassar, the rector. In his opening remarks, Bishop Cary said that he was “taking possession of the bishop’s chair, which represents the diocese”.

At the homily, Bishop Cary began by introducing himself and noting that the last six weeks have been, for him, “days of becoming a bishop”, and noted that it is “quite a change”. Our prayers must be with him on a daily basis!

Bishop Cary also mentioned that he has an affinity for St. Francis de Sales, who is the patron saint of the Diocese, and of the Cathedral which is named after him.

For the actual homily, Bishop Cary drew a parallel between the Gospel account of Jairus and his daughter and the Fortnight for Freedom concerning Obamacare and the HHS mandate.

First he noted that to become a bishop in 2012 was to step into the campaign to protect religious freedom. In today's gospel, Jesus, said the bishop, was also in a campaign – he was marching to do battle with death as he made his way to the house of Jairus, with a large crowd following in procession. Along the way, Jesus performed some healing acts for those battling illness. “To be a Christian is to step into that procession to battle death,” said Bishop Cary

Of course, the real battle with death was ultimately on the Cross, said the bishop, and what seemed to be a defeat was in fact a victory.

Bishop Cary went on to say that religious liberty is currently at stake. The HHS mandate “requires Catholics to ignore the teaching of the Church,” he said. “The Church must publicly go against its own teaching and surrender to the moral decisions of the State.

“The government bureaucracy – the HHS – tells us who we are and can be as Catholics,” he added, “by their definition of  ‘religious institution’.  We cease to be Catholics if we employ or serve more non-Catholics than Catholics.

“We used to ask ‘Are you hungry?’ or ‘Are you sick?’ Now we have to ask ‘Are you Catholic?’ We do these things – feed the hungry and take care of the sick – because we are Catholics…not because they are.”

Here are a few more photos: 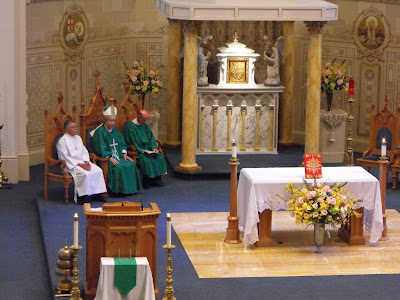 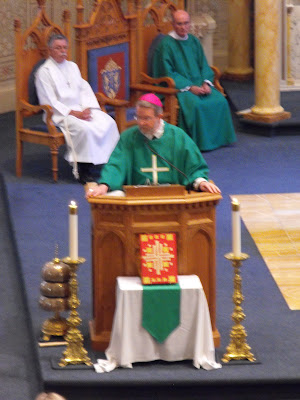