An Interview With Fr. Michael Rodriguez

Fr. Michael Rodriguez was the guest of Larry Roach on the Salve Regina radio show on August 30.  For a little background on this heroic, orthodox priest, go here, here, and here.

Here’s a summary of the interview:

Fr. Rodriguez will celebrate his 16th anniversary of ordination to the priesthood on December 8 this year. He described three “stages” in his priesthood as he moved from a being a priest ordained in and celebrating the Novus Ordo Mass to a priest who now celebrates the “old” Mass almost exclusively.

In the first stage, his first assignment was at a parish named Our Lady of the Valley (I noted the name especially because that is the name of the only parish in the Diocese of Baker that has had a pastor who celebrated the EF Mass every Sunday – at least for a while!). After about a year and a half of ministry, he realized there was a crisis of faith in the Church; he discussed wanting to start a weekly Holy Hour at his parish; his pastor suggested that once a month might suffice at the beginning. He preached and talked about it, trying to cultivate interest, but only a few people came.

Next, Fr. Rodriguez became the vocations director in his diocese after only a year and a half as a priest, and he resigned that position after serving in less than two years – “that’s another story in itself,” he said.  But he noted that his time as vocations director also brought home to him the fact that the crisis in faith was very much a part of the priesthood as well as in the laity. That made promoting vocations difficult – the example of the priests was not helping.

After that, as the years went on, Fr. Rodriguez kept seeing how widespread the crisis was, and that there moral corruption in the priesthood.

The third stage began when some of the lay people in his parish began talking to him about saying the Traditional Latin Mass. A Jesuit priest had been saying the indult Mass for them about twice a month, and they were afraid he was about to be moved. Fr. Rodriguez was a little ambivalent; he was interested, but felt that he was just too busy with other parish duties to learn the old Mass.

But in 2005, he began to study the old Mass. This was a turning point for him because he began to see that all of the problems of the crisis of faith he had seen in his experience as a priest had a connection with “how we had abandoned our Mass, and abandoned our way of praying, and even the theology and doctrine” of the faith. He saw that this was directly related to what was happening “in the streets”.

As an example, he mentioned the priesthood, and the difference the TLM makes for the priest’s perception of himself as a priest. He found a different theology of the priesthood in the old Mass that was “truly Catholic”, he said. He felt he was rediscovering himself as a priest, realizing, “That’s who I really am”. This made sense to him in terms of the problems in the priesthood we see today. Priest wonder, he says, who they are as a priest. “There seems to be this feeling that ‘I’m a social worker’ or ‘I’m a do-gooder’, or ‘I’ve got to do something to make the world a better place’. 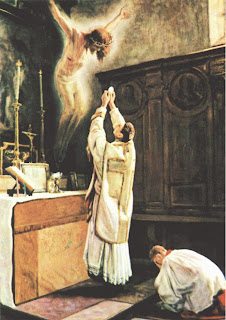 But that’s not it, says Fr. Rodriguez. The old Mass brings the priest to the realization that “more than anything else, he acts in the person of Christ the Head. Through [the priest], the Lord continues to make present the sacrifice of the Cross that brings salvation to the world. [The priest] is there to forgive sins in the name of Christ. You see more clearly and strongly how your identity as a priest has to do with the salvation of souls, getting souls to Heaven, leading souls to God – not in this world, but other-worldly. You become grounded in the theology of the priesthood as it is enshrined in the TLM.”

Fr. Rodriguez emphasized time and again that there is a crisis of the faith for lay Catholics. Catholics who think that they can reject Church teaching on contraception, for example, and still think that they can be Catholics in good standing “have no idea what Catholicism is. And that individual truly doesn’t even know who Jesus Christ is.”

There is also a problem with the Church hierarchy not fully recognizing or acknowledging the gravity of this crisis of faith. Fr. Rodriguez noted that Pope Benedict XVI seems to acknowledge it more than his predecessor, but there is still  something lacking.

In answering a question from a caller, Fr. Rodriguez addressed the use of Latin and “full  participation” in the Mass. He pointed out that the language is not really as important as one might initially think. He said that in his experience, most Catholics who attend the TLM today have a better understanding of what’s going on at Mass. “Participation” really means understanding and also truly believing what is happening at Mass. Mass is not just the words used to pray the prayers; it’s about belief, love, and devotion.

He gave this example: suppose someone is at Mass, not understanding the Latin words, but gazing at the altar, watching the action at the altar with love and devotion. That individual understands what the Mass is about, even without understanding the actual meaning of each word. Compare this to the person who understands the meaning of every word, but doesn’t really believe what the Mass is all about – the sacrifice of the Cross, the Real Presence of Jesus, etc. 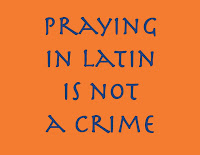 In responding to the caller, Fr. Rodriguez also listed these ten reasons for using Latin in the liturgy (thank you to the individual who supplied me with the written form!):

(1) Theocentric. We pray in Latin because the Holy Sacrifice of the Mass is the worship of the Triune God, it is directed to God, not to a particular community.

(2) Eternity. Latin expresses how the Holy Sacrifice of the Mass transcends all time (and space) and is a window into eternity.

(3) Immutability. Since Latin doesn’t change, it reflects that the truths revealed by God never change. The Mass in its essential mysteries never changes. It is the same yesterday, today, and forever.

[Reasons 4-7 show that the use of Latin in the liturgy reflects the reality of the Catholic Church as One, Holy, Catholic, and Apostolic.]

(4) One. Every single Catholic worshipping God in the same tongue is an admirable bond of unity.

(6) Catholic. Latin is a sign of the Church’s universal nature, embracing all races, nations, cultures (space), and times.

(7) Apostolic. By praying in Latin, we continue to worship exactly as our forefathers did.

(8) Obedience. The Second Vatican Council itself, particularly in Sacrosanctum Concilium, Nos. 36 & 54 mandates that Latin be preserved as the language of the liturgy.

(10) Precision. The dignity, clarity and precision of the Latin language gives perfect human expression to the truths of the Faith.

Fr. Rodriguez is a very engaging guest! You can listen to the whole interview here.
at 9:31 AM