Monasticism in the Western Church, Part 3

This is the third of a three-part essay on monasticism by Stephanie Swee, President of the Society of St. Gregory the Great. See Part 1 here. See Part 2 here.

The Legacy of St. Benedict:


Monasticism in the Western Church, Part 3

If we accept that monastic life is merely Christianity in its ultimate form, what then are the major elements that set the monk apart from his fellow believers in the world? The book Monastic Studies concentrates on three things that a monk promises in the Benedictine tradition when he embraces the consecrated life: stability, conversio  (or conversatio) morum and obedience. A long analysis of how the second, conversion, encompasses the third is available. What is key, however, is that all those who seek to live as monastics are characterized by, first, promising to “persevere in the monastic way of life until death in (that particular) monastery (stability); second, promising to “embrace the whole of religious life, which includes the essential elements of poverty and chastity (conversatio), and, finally, vowing  obedience to God’s representatives on earth, which is  the most lofty form of conversion of manners. By his vow of conversio, too, the monk obliges himself to seek after perfection according to the Rule of St. Benedict.”[1]

All of these elements are, according to Van Zeller, primarily a method for the necessary uprooting of self a consecrated person undertakes; not, he cautions, to negatively deny the ego for its own sake, but as a surer way to union with God.[2] These elements also serve as an objective framework of monastic legislation and a method of observance which becomes a path to perfection.[3]

If one stopped, however, with the Rule and the counsels of poverty, chastity, and obedience as expressed in the conversio of Benedict, most monks would still be in confusion as to what they are actually to do day-to-day.  Benedict lays out also the routines that move the monk closer to his goal of eternal beatitude. In his book, Monastic Practices, Charles Cummings, a Cistercian, breaks these into 12 activities that the monk engages in every day of his life.

The first three are the threefold bases for religious life. To begin with, there is the practice of Sacred Readings, the Scriptures and writings of the Fathers of the Church primarily.  As one of essentials, “the high value monks have placed on sacred reading comes from the conviction that it is in this practice we meet God through the instrumentality of the divine word.”[4]

The second foundational activity is Liturgical Prayer, which includes both the Mass and the Divine Office. Benedict divides the office in two ways for his monks. First, he set up a system in which all 150 psalms are said every week. In modern times, that has been modified in some cases, stretching the whole of psalmody to cover two, or even four, weeks. The other division involves the idea of “praying always”, so that the monks meet in choir eight times throughout the day and night. These hours of communal prayer are designated as Vigils (or Matins); Lauds;  Prime, Terce, Sext and None (the last four called the Little Hours), Vespers, and Compline (night prayer.) The Mass, of course, is the summit of man’s praise of God, so it has pride of place. The Conventual Mass is usually attended by all the brothers and priests in the monastery, but those in Holy Orders may also say Mass separately from the community. “There, (in the sacrifice of the Mass) more than anywhere else, we meet the Risen Christ in the fullness of His saving power…” [5] 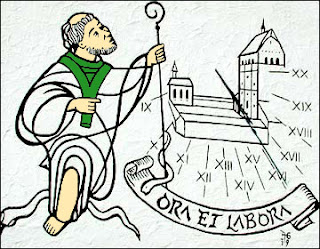 The third mainstay of the monastic life is work. The motto of the followers of Benedict is, in fact, ora et labora, “pray and work.” Often today, as in early times, the work of the abbey is the main support for the necessities of life, involving harvesting of crops, artistry of the monks or manufacture of food.  Beyond support for the monks, though, Benedict was wise enough to know that if the community engaged only in prayer and reading, they became restless and sometimes discontent. “If, however, they (monks and nuns) kept their hands occupied with simple, even monotonous, tasks, they could more easily keep their minds and hearts centered on God for long periods of time.”[6] Work, certainly, is enjoined on any Christian.  As Paul wrote to the Thessalonians: “We did not live lives of disorder when we were among you, nor depend on anyone for  food. Rather we worked day and night, laboring to the point of exhaustion, so as not to impose on any of you … we used to lay down a rule that anyone who would not work, could not eat.”[7]

Other important practices that move the monk toward his goal of union with God are such things as customs, monastic decorum (a form of charity toward others), short prayers to keep the mind always on God, self-discipline, silence, watching – a practice of openness to the movement of the Holy Spirit – communication in community, stability, and the monastic cell as a place to encounter God in solitude.

The first of these, customs, highlights a key characteristic of the monastic community - the handing on of traditions from one generation to the next. Those entering religious life must be open to receiving practices designed to help all to live in harmony and peace. Eventually, the seasoned monk bestows his knowledge on novices who come to the community in his wake. “…[O]ur monastic practices enshrine values that have been considered important by those within the tradition … (some) e.g., are designed to protect the values of silence, charity and fraternal support; others to inculcate a spirit of reverence or humility or self-discipline.”[8]

If there are many externals that go beyond practices of Christians in the world, though, it is very important to note the outward actions are always directed to that which is interior. “The search, the true search, in which the whole of one’s being is engaged, is not for some thing, but for Someone: The search for God - that is the beginning and end of monasticism.[9]

There are, according to Van Zeller, specifically monastic virtues which the vows and practices are meant to foster. While charity is enjoined on all Christians, monastic charity has a twofold relationship with others, being directed both at those in community and those who come to the monastery seeking direction. In the latter case, hospitality toward visitors is a solemn duty for every monk. As for the former, “whatever interferes with fraternal charity is the enemy of the monastic spirit.”[10]

Another preeminent virtue monks must cultivate is humility. “In virtue of our monastic life,  we should be easier to live with in the monastery than we were in the world; more tolerant, more considerate, even more courteous…[T]he connection between charity and humility is so close that to describe a monk as a good community man means he does not thrust himself forward … in such a way that all must acknowledge his contribution.”[11]

A third important characteristic a monk must cultivate is a certain equanimity. Van Zeller refers to it as “an imperturbability of mind which rides the tempests of both sorrow and temptation” without losing its grounding in God and its peace of soul. St.  Benedict’s doctrine of compunction is repeated throughout his rule. “The problem for most monks is to balance their joys and sorrows in such a way that joy does not become an end in itself and a dissipation and that sorrow does not become dispiriting.”[12] Finally, a strong and abiding faith is necessary for the monk, who may see little or no effect of his work and prayer in visible results. “What he has to accept in faith is that the work of the choir and contemplation is work for souls.”[13]

In looking at monastic life, we cannot exclude women who have and do seek perfection as consecrated religious. Even from the time of Benedict, his sister St. Scholastica founded monasteries for nuns who followed the same rule as their brother monks with certain modifications. And, it must be said, there have been other successful types of monastic spirituality in addition to the Benedictine way, such as the Augustinian model followed by many congregations of religious even today.

But it is Benedict who first codified and organized the life of monasticism. If his vision is the Christian life lived fully requires withdrawal from the world, it is partly so it can be an example for those in the world who also strive to follow Christ’s way to the Father.

Every Christian must practice what the monk does, if to a lesser degree:  self-denial, penance, prayer and obedience to God through His Church. Human destiny is the same for all God’s people, as the words of St. Augustine illustrate so famously.  “Our hearts are restless, O Lord, until they rest in Thee.”