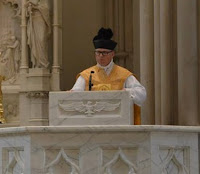 Dominica XV Per Annum, Anno B

“The Twelve drove out many demons, and they anointed with oil many who were sick and cured them."

When God created the heavens and all things invisible, He created the angels. St. Paul writes (elsewhere in the scriptures) about thrones, dominions, principalities, and powers (Col. 1:16); elsewhere again about the virtues (Eph 1:21); angels (Heb. ch.1), archangels (1 Thess. 4:15), and cherubim (Heb. 9:5). The scriptures give us one other type of angel called seraphim (Is. 6:2). That makes nine different ranks or choirs of angels. Each of these nine choirs of angels are hierarchically ordered. We acknowledge that each of the various hierarchies exercise different offices, some higher and some lower. In order to learn about the science of angelology, we can look to one of the Church Fathers named Dionysius the Areopagite in his work, “The Celestial Hierarchy.” We can also look to St. Thomas Aquinas.

St. Thomas, keeping with Dionysius the Areopagite, “divides the angels into three hierarchies each of which contains three orders.” So, there are three sets of three. They are ranked and ordered according to their proximity to the God: The Supreme Being. “In the first hierarchy he places the Seraphim, Cherubim, and Thrones; in the second, the Dominations, Virtues, and Powers; in the third, the Principalities, Archangels, and Angels”(cf. Pope, Hugh. "Angels." The Catholic Encyclopedia. Vol. 1. New York: Robert Appleton Company, 1907. pg. 478 (column II). 11 Jul. 2015 <http://www.newadvent.org/cathen/01476d.htm>.).

Venerable Prosper Gueranger writes that “It is from the lowest of the nine choirs, the nearest to ourselves, that the Guardian Angels are for the most part selected” (The Liturgical Year. Vol. XIV. Feast of the Guardian Angels). By this he is saying that the guardian angels may be called from among the other choirs of angels, but principally from among the lowest choir which are called angels. Other angelologists (cf. “Our Guardian Angel” available from Opus Sanctorum Angelorum. http://www.opusangelorum.org/Books/Books.html) teach that our guardian angels are assigned to us from among all nine choirs of angels according to our needs, our talents, and our personality. To understand this, let’s look back at each of the nine choirs of angels to see what each of them do. Venerable Prosper Gueranger continues:

“God reserves to the Seraphim, Cherubim, and Thrones the honour of following His Own immediate court. The Dominations, from the steps of His throne, preside over the government of the universe; the Virtues watch over the course of nature's laws, the preservation of species, and the movements of the heavens; the Powers hold the spirits of wickedness in subjection. The human race in its entirety, as also its great social bodies, the nations and the churches, are confided to the Principalities; while the Archangels, who preside over smaller communities, seem also to have the office of transmitting to the Angels the commands of God, together with the love and light which come down even to us from the first and highest hierarchy.” (The Liturgical Year. Vol. XIV. Feast of the Guardian Angels).

Each of us has a holy guardian angel. That holy angel will have been taken from among these nine choirs of angels and during the time of our life on earth, that angel will serve us and guard and protect us. He will encourage us to virtue and holiness. But there are other angels who are not holy. These angels seek to discourage us and tempt us to turn from God.

In the beginning, there was an angel from among the highest choir––the seraphim––who refused to stoop to serve a mere man. He said, Non serviam!  “I will not serve,” and by those words, he fell taking with him a third of the angels. Our Lord tells us elsewhere that He watched satan fall like lightening from heaven. Those angels spend their time prowling about the earth for the ruin of souls. We can call them fallen angels or demons.

So there are holy angels who encourage us and demons who discourage us. This is nothing to squirm about. Each of us encounters temptation every day of one sort or another. It is common to refer to a temptation as a demon or a spirit. For instance, if one is tempted to doubt a truth of the faith, one could acknowledge the doubt itself to be a spirit. It is the spirit of doubt that tempts one to doubt God. There is a spirit of jealousy, a spirit of unforgiveness, a spirit of self-pity, a spirit of sloth, pride, lust, etc. We can just as well call them spirits as we do demons.

So first we must be given life; then that life may be healed. In the gospel, the Twelve first drove out the demons, then they anointed the sick and cured them. We see this in the Sacrament of Extreme Unction, aka., the Anointing of the Sick. One must be living in order to receive the healing grace of the Sacrament of Anointing. It is a sacrament of the living in order to prepare for a holy death which leads one to eternal life.

The Council of Trent teaches us that the Sacrament of Extreme Unction, aka the Anointing of the Sick, is the completion of the Sacrament of Penance. Many are under the mistaken belief that the Anointing of the Sick forgives one’s sins. That is not true unless one is unconscious or unable to confess due to illness which would prevent it. In that case, the sacrament supplies the grace for the forgiveness of sins provided that one intends to confess. But ordinarily, as long as one is able to confess, then one must confess sacramentally to a priest first, and then receive the anointing as the completion of the Sacrament of Penance.

Good health is not only physical, but also spiritual, mental, and emotional. When we are in a state of sanctifying grace, the Holy Spirit fills our souls and we are truly alive and we are truly healthy. We receive this health when we get rid of the spirits of anger, bitterness, unforgiveness, jealousy, self-righteousness, pride, lust, etc., in the sacrament of Penance. We make a good confession and ask God to banish all of these spirits, these vices and sins in the name of Jesus Christ. The Holy Spirit then comes to fill our souls. This is what our holy guardian angels will constantly encourage us to do. The fallen angels will constantly try to discourage us and fill us with fear and anxiety about going to Confession. They know that Confession will give us peace, and health, and eternal life. Our enemies prowl about the earth seeking the ruin of souls by spreading anxiety, sickness and death.

Let us not listen to the voices of the fallen angels. Let us listen to the voices of the holy angels: our holy guardian angel, the holy archangel of this parish, the holy principality of this archdiocese and of this nation. But in order to hear the voices of the holy angels, we must listen. We must pray and we must have silence in our life. The demons will try to fill our ears and our eyes with noise and distractions. At the grocery store, we are bombarded with tabloids celebrating vice and scandal. Where will we hear the encouraging message of holiness, purity, and virtue if we do not listen to our guardian angels?  We must listen and we must repeat what they say to us. We must also be the voices of our guardian angels to the rest of the world. We must counter the messages of vice and scandal by our good example of living well and encouraging others to seek truth, goodness, beauty, and to live lives of virtue and holiness. We must be the voice of such things in this world because nobody else is going to do it. If the Church does not speak up, and if Christians do not encourage one another, then who will speak out against the evils of the world?

Let us first confess our sins and ask Jesus Christ to drive out the demons so that we can be healed. Let us listen to our own guardian angels, and then be as guardian angels to one another and to the world, repeating their holy words of encouragement. Let us seek to counter the voices of discouragement and offer the hope of healing to a wounded world.