To Lose One's Life, Or Save It 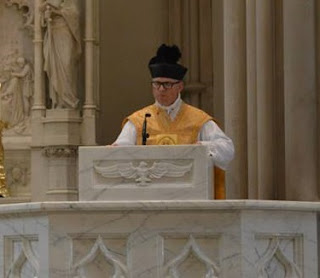 “whoever wishes to save his life will lose it, but whoever loses his life for my sake and that of the gospel will save it.”

These words might call to mind the bloody martyrdom of Christians in the early Roman Empire, or even today in the Middle East. But one need not be a martyr in order to fulfill these words. There is also the unbloody martyrdom of living a pure and holy life. This coming Thursday, Sept 17th, the Franciscan Order commemorates the imprinting of the Sacred Stigmata into the hands, feet, and side of their holy founder St. Francis of Assisi. In his biography of St. Francis, St. Bonaventure writes this account:

"Two years before he gave his spirit back to heaven after many and varied labors, he was led apart by divine providence to a high place which is called Mount La Verna. When according to his usual custom he had begun to fast there for forty days in honor of St. Michael the Archangel, he experienced more abundantly than usual an overflow of the sweetness of heavenly contemplation, he burned with a stronger flame of heavenly desires, and he began to experience more fully the gifts of heavenly grace (Ch. 13.1).

Through divine inspiration he had learned that if he opened the book of the Gospel, Christ would reveal to him what God considered most acceptable in him and from him. After praying with much devotion, he took the book of the Gospels from the altar and had his companion, a holy man dedicated to God, open it three times in the name of the Holy Trinity. When all three times the book was opened the Lord’s passion always met his eyes, the man filled with God understood that just as he had imitated Christ in the actions of his life, so he should be conformed to him in the affliction and sorrow of his passion, before he would pass out of this world (John 13:1). And although his body was already weakened by the great austerity of his past life and his continual carrying of the Lord’s cross, he was in no way terrified but was inspired even more vigorously to endure martyrdom (13.2).

…On a certain morning about the feast of the Exultation of the Cross, while Francis was praying on the mountainside, he saw a Seraph with six fiery and shining wings descend from the height of heaven. And when in swift flight the Seraph had reached a spot in the air near the man of God, there appeared between the wings the figure of a man crucified, with his hands and feet extended in the form of a cross and fastened to a cross…When Francis saw this, he was overwhelmed and his heart was flooded with a mixture of joy and sorrow. He rejoiced because of the gracious way Christ looked upon him under the appearance of the Seraph, but the fact that he was fastened to a cross pierced his soul with a sword of compassionate sorrow (Luke 2:35).

…Eventually he understood by a revelation from the Lord that divine providence had shown him this vision so that, as Christ’s lover, he might learn in advance that he was to be totally transformed into the likeness of Christ crucified, not by the martyrdom of his flesh, but by the fire of his love consuming his soul.
As the vision disappeared, it left in his heart a marvelous ardor and imprinted on his body markings that were no less marvelous. Immediately the marks of nails began to appear in his hands and feet just as he had seen a little before in the figure of the man crucified. …Also his right side, as if pierced with a lance, was marked with a red wound from which his sacred blood often flowed, moistening his tunic and undergarments (13.3).

When…the forty days were over that he had planned to spend in solitude, and the feast of St. Michael the Archangel had also arrived, the angelic man Francis came down from the mountain, bearing with him the image of the Crucified, which was depicted not on tablets of stone, or on panels of wood by the hands of a craftsman, but engraved in the members of his body by the finger of the living God… (13.5).

St. Francis was not called to martyrdom, but he endured suffering for the sake of the gospel. He did so not only by a life of self-denial, or mortification of the flesh, but also by praying for and accepting the very wounds of Jesus Christ onto his own mortal flesh. He did not wish to save his life, but to lose it for the sake of Christ. I remember many years ago when I was first discerning priesthood, that I wrote to my great aunt, Sr. Dolorine of the Immaculate Conception, a Franciscan sister, in her 90s at the time. I shared with her my romantic notion of wishing to suffer for Christ for the conversion of souls. She responded by saying, 'Dear great nephew, you do not have to ask for suffering, you will get plenty of it without asking.'

Suffering is a stumbling block for many. We should never wish suffering on another person. When we love another person, it hurts us to see him or her suffer. We wish that we could take their suffering away. We might even pray to God that we might take some of their suffering so that they might be relieved and spared. Is that not just what Our Lord is asking from us? He asks us to imitate Him, to take on some of His sufferings, for the sake of His Body, the Church.

“‘If any man will come after me, let him deny himself and take up his cross and follow me.’ If there is any one who must follow Jesus, it is he who seeks after perfection. But how can a lover of pleasure, of honors, of riches follow Jesus? How can one follow Christ, if one is unwilling to carry his cross daily––the cross that God Himself has chosen for him and sent to him?” (Tanquerey, The Spiritual Life, ¶761). St. Francis was given his own share in the cross. But each of us has his or her own special cross chosen for us by God. It is special. As Jesus embraced His Cross and loved His Cross, let us consider how we must love the Cross given to us to carry. Let us give thanks to God for it everyday. Let us praise God for the Cross He has chosen for us. In that praise and thanksgiving, we will discover consolation, healing, and salvation by embracing and loving our cross, by taking it up daily and following Him.
at 9:46 AM