Here’s another meditation from Denys the Carthusian, preceded by a few biographical words. I posted the one for Wednesday here. You can read the whole exercise at this website.

by Denys the Carthusian

Introduction by the Translator

Denys à Ryckel, better known as Denys the Carthusian, was born in the year 1402 at Ryckel, a village near St. Troud, in the Bishopric of Liège. In his twenty-first year he entered the Carthusian Order at Roermond in , and there died in the year 1471 at the age of sixty-nine.

By scholastic writers he has been given the title of Doctor Ecstaticus (the Ecstatic Doctor), both from his frequently having been rapt in ecstasy, as well as from the depth and sublimity of his valuable writings on the contemplative life.

He is also, probably, the most prolific of ecclesiastical authors. His entire works, as recently re-edited, fill no less than forty-two stout quarto volumes, forming in themselves an almost complete ecclesiastical library.
...
Friday: Of Our Lord's Passion 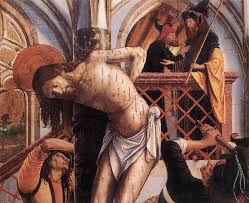 Behold and see, my soul, how much and how dearly Christ, God's only begotten Son has loved you. He was made man for you; and for you he died a most bitter death. His sufferings verily were all the sharper from the tender fashion of his making.

See how those ruthless men seized Him and held Him, Christ Jesus, the most loving Son of God! See how they bound Him and dragged Him off. They plucked his beard and his hair, they blindfolded his lustrous eyes. They spat in his sweet face and struck his ruddy cheeks and holy lips, mocking and blaspheming as they cried: "Prophesy unto us o Christ who is he that struck You". Then, see how they led Him bound like a robber before Pilate, bore false witness against Him, the Holy of Holies, God's only Son. See Him sent to Herod and how He is sent back to Pilate. They stripped Him shamefully before the whole crowd, tied Him to a pillar and scourged Him with grievous stripes till his bones showed through the flesh. He was crowned with sharp thorns which pierced into his sacred head, and they put a purple garment on him in mockery. Watch then, as they strike his thorn-crowned head with a reed, till the blood from his forehead courses down his face, fills his eyes, oozes into his mouth and ears; and then bending the knee before Him in mockery they say: "Hail, King of the Jews"!

My soul, behold how in such a plight, Jesus was led to the people, "bearing the crown of thorns and the purple garment": his face all dappled in blood, as the lowest of men. Recall how the raging and maddened crowd yelled out: "Away with Him, away with Him, crucify Him!" See Him as He stands before Pilate and Herod and says never a word, with his head bowed, the image of a patient and most meek lamb. He is condemned to death by Pilate, and see Him as they lead Him away bearing his own cross between two thieves and raise Him aloft amongst criminals. His whole body was stretched out cruelly to the dislocation of his members, the opening of veins, the numbering of all his bones. They gave Him gall and vinegar to drink and then cruelly mocked Him saying: "Let Christ the King of Israel come down now from the cross. If He be the Son of God, let Him come down. He saved others, Himself He cannot save".

Remember how hanging in agony on the cross, Christ spoke seven words, saying: "Father, forgive them for they know not what they do". To the thief he said: "This day shall you be with me in ". To his most sweet mother He said: "Woman, behold your son", and to the disciple John: "Behold your mother". To his Father He cried: Eli, Eli lamma sabacthani? That is: "My God, my God, why have You forsaken me?" Later, He said: "I thirst"; when they had given Him vinegar, He said: "It is finished". And lastly: "Father, into your hands I commend my spirit"; and so "bowing his head, He gave up the ghost". Oh, what was his sorrow for his sweet mother! How lovingly and patiently did He not pray for his executioners! And though he suffered agonies of thirst in his body, He thirsted yet more after our salvation, so that He suffered more in soul by his compassion than by his bodily pains.

O my soul, be not ungrateful nor unmindful of all this. Behold who is He that suffers for you. See the width and depth of his sufferings. Strive to follow in his footsteps. Learn to suffer patiently and to rejoice in adversity. In every temptation have recourse to the memory of these things: grave them deep on your heart, and time and again call them back to mind.