The source of the following excerpt is: The Sermons of St. Francis de Sales for Lent. This is from the sermon for the fourth Sunday of Lent; I’ve excerpted only a small portion of it here. 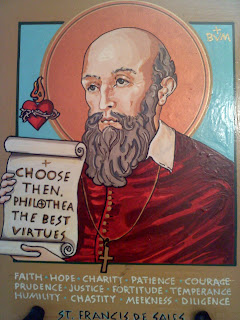 “Jesus then took the loaves of bread, and having given thanks, he distributed them to those who were seated there; in the same way he gave them some fish, as much as they wanted.”

The narrative which Holy Church presents to us in today’s Gospel [Jn. 6:1-15] is a picture in which are portrayed a thousand beautiful subjects helpful to us in admiring and praising the Divine Majesty. But above all else, this picture presents to us the admirable Providence, both general and particular, which God has for humanity, and especially for those who love Him and who live according to His will in Christianity.
…

The children of Israel had no manna until they had run out of the flour from Egypt…God would sooner work miracles than leave without assistance, either spiritual or temporal, those who trust entirely in His Divine Providence. Yet He wants us, for our part, to do all that lies in our power. That is, He wants us to use the ordinary means to attain perfection. If these should fail, He will never fail to assist us. As long as we have our rules, our constitutions and persons who tell us what we ought to do, let us not expect God to work miracles to guide us to perfection, for He will not do it.

Put Abraham with his family [cf. Gen. 12:1] and Elias among the prophets. The Lord will perform no prodigy to nourish them. Why not? Because He wishes Abraham to reap his grain, to have it threshed and ground and finally made into bread for his support. He has cows, he must be fed by their milk; or else, if he wishes, he may kill his fat calves and make a banquet for the angels. [Gen. 18:7-8]. But, on the contrary, place Elias near the torrent of Carith or in the desert of Bersabee [3 Kgs. (I Kgs.) 17:3-6; 19:3-8], and you will see that there God supports him – in one place by the instrumentality of angels, and in the other by that of a raven, which brought him bread and meat every day for his sustenance.

Therefore, when human aid fails us, all is not wanting, for God takes over and takes care of us by His special Providence. This poor multitude who follow Our Lord today were assisted by Him only after they were all near faint with hunger. He felt an extreme pity for them because, in their love of Him, they had so forgotten themselves that none had brought provisions, except the little Martial who had five barley loaves and two fish. It is as if the Savior, full of love for the hearts of these good people (who numbered about five thousand), said to Himself: “You have no care whatever for yourselves, but I Myself will take care of you.” Therefore, He called St. Philip to Him and asked him: “These poor people will faint on the way if we do not assist them with some food, but where could we find sufficient to sustain them?” He did not ask this through ignorance, but to test him.

We must not think that God tests us in order to lead us to evil, for that simply cannot be. [Jas. 1:13]. He tests His most beloved servants so that they might prove their fidelity and love for Him, and that they might accomplish great and shining works, as He did with Abraham when He commanded him to sacrifice his beloved son Isaac. [Gen. 22:1-2]. In the same way, He sometimes tests His servants in their confidence in Divine Providence, permitting them to be so languid, so dry and so full of aridity in all their spiritual exercises that they do not know where to turn for relief from the interior weariness which overwhelms them.
…
Our Lord tested St. Philip in order to humble him – and with good reason, after Philip had given an answer so full of human prudence. It is a remarkable thing: God so loves humility that He sometimes tests us, not to make us do evil but to teach us by our own experience what we really are, permitting us to say or do some foolish thing, giving us reason to humble ourselves…

We must indeed keep ourselves humble because of our imperfections, but this humility must be the foundation of a great generosity, for the one without the other degenerates into imperfection. Humility without generosity is only a deception and a cowardice of heart which makes us think that we are good for nothing and that others should never think of using us in anything great. On the other hand, generosity without humility is only presumption. We may indeed say: “It is true I have no virtue, still less the necessary gifts to be used in such a charge”; but after that humble acknowledgment we must so put our confidence in God as to believe that He will not fail to give them to us when it is necessary that we have them, and when He wants to make use of us, provided only that we forget ourselves and be occupied in faithfully praising His Divine Majesty and helping our neighbor to do the same, so as to increase His glory as much as lies in our power. Notwithstanding the fact that St. Philip and St. Andrew declared that the five barley loaves and two fish were nothing for so many, Our Lord ordered them to be brought to Him, and He commanded His Apostles to make the people sit down. They all did so very simply, and in this they were certainly admirable, for they sat down to table without seeing anything on it, and there was nothing to suggest that anything could be given to them. Then Jesus took the loaves of bread, blessed them, broke them and ordered the Apostles to distribute them. When this was done, there was still some left, even though all had had enough to satisfy their need.

The question has been raised, among others, as to whether all ate of the five loaves or whether Our Lord, by His almighty power, made new ones which were distributed to the people. In speaking of another similar miracle – not the same miracle, since the number of loaves is seven, and St. John clearly relates that there were only five in the miracle of today’s Gospel – St. Mark says expressly that all ate of the seven loaves and two fish. [Mk. 8:6-7, 20].

There is another question whose answer will help us here. At the Resurrection, how can it be that each one will rise again in his same body, since some will have been eaten by worms, others by wild beast or by birds, others will have been burned and their ashes scattered to the winds. How then can it be that at the same time the angel shall call each one to come to judgment; all, I say, in an instant, without any delay, to rise again clothed in their own flesh? [1 Cor. 15:52]. By the almighty power of God, I, in this same body which I now possess, will rise again. He will reproduce it; for as it was not difficult for Him to produce it such as it is, it will not be any more difficult to produce it again.

Thus Our Lord made all the five thousand men eat of the same five loaves and two fish, reproducing them as often as was necessary, that each one might have a portion according to his need. All ate then of five loaves and two fish miraculously multiplied – all but St. Martial [the boy who brought the loaves and fishes] who, not participating in this miracle, ate his own bread all alone and not that of the Savior, because he had brought his own provision. For as long as we have our own bread, God does not work prodigies to sustain us.
…

We say that we do not know whether the will to please Him that we now have will remain with us during our whole life. Alas! It is true, for there is nothing so weak and changeable as we are. But nevertheless, let us not be troubled. Let us, rather, frequently lay this good will before Our Lord; let us place it in His hands and He will renew it as often it is necessary that we may have enough for our whole mortal life. After this life there will be no cause for fear, nor for so many apprehensions, for with the help of God, we shall be in a safe place. There we shall never cease glorifying this Divine Majesty whom we have so dearly loved and followed according to our power, through the deserts of this miserable world to the highest summit of the mountain of perfection, to which we shall all attain by His grace, for the honor and glory of Our Lord, who is our Divine Master. Amen.
at 6:17 AM