Because I was away on retreat, I was not able to post this “mini-retreat” at the appropriate time. But, for your retrospective pleasure, here it is now!

According to the tradition that has been passed down to us, Joachim and Anna, called “noble branches of the family of David”, were married for “twenty years without offspring and made a vow to the Lord that if he granted them a child, they would dedicate it to the service of God” (Voragine 152). One day, an angel appeared to Joachim and reminded him about all the instances of barren women in the scriptures who gave birth to the great patriarchs. He then announced that Anna would conceive and bear a daughter named Mary. The angel said: “As you have vowed, she will be consecrated to the Lord from infancy and filled with the Holy Spirit from her mother’s womb. She will not live outside among the common people but will abide in the Temple at all times. And, as she will be born of an unfruitful mother, so, miraculously, the Son of the Most High will be born from her. His name will be Jesus, and through him all nations will be saved. And let this be a sign to you: when you arrive at the Golden Gate of Jerusalem, Anna your wife will be there waiting for you.

Meanwhile the angel appeared to Anna and announced the same, telling her to meet her husband at the Golden Gate. The meeting at the Golden Gate is a famous theme in religious iconography and art. Mary was naturally conceived in the womb of Anna according to God’s plan for married couples. But this conception was unlike any other conception ever before or since. Joachim and Anna were not immaculate, but for God’s purposes, God made Mary immaculate from the first moment of her conception. …“at the very instant when God united the soul of Mary, which He had created, to the body which it was to animate, this ever-blessed soul, did not only not contract the stain, which at the same instant defiles every human soul, but was filled with an immeasurable grace which rendered her, from that moment, the mirror of the sanctity of God Himself, as far as this is possible to a creature” (Gueranger, The Liturgical Year, Vol. I., p. 378).

Soon after Mary was born, her parents brought her to the Temple to be presented, and then at the age of three, Mary was brought to live in the Temple precincts with the other virgins who lived there. She was dedicated to God. By tradition, we know that when she was betrothed to St. Joseph, they had an understanding that she would remain a virgin because she was vowed to God and to no other. So, now the angel Gabriel greets her. “Hail full of grace.” Full of grace is her title. Gratia plena. Isn’t that a beautiful name? Gratia plena. Grace can be defined as the indwelling of the Holy Spirit and His sevenfold gifts. In Mary’s case, she is not merely the recipient of grace as we all are at baptism, but her very being overflows with grace because she is immaculate. There is nothing to diminish grace in her because she never sinned.

We can say the Christ Himself is the fullness of grace, since He is God. The Holy Spirit is the giver of life and the communicator of grace. The Holy Spirit proceeds forth from the Father and the Son. So the grace of the Holy Spirit is given to Mary and she is full of grace. But her fullness is analogous to the fullness of grace in Jesus Christ. St. Thomas Aquinas describes it this way: “Whereas the Blessed Virgin Mary received such a fullness of grace that she was nearest of all to the Author of grace; so that she received within her Him who is full of all grace; and, by bringing Him forth, she in a manner dispensed grace to all” (ST IIIa, q. 27, a. 5 ad 1).

St. Bernard of Clairveaux says writes: “In the Acts of the Apostles we read that Stephen was full of grace and that the apostles were filled with the Holy Ghost, but in a far different way from that of Mary. In another way, neither in him (Stephen) did the fullness of the Godhead dwell bodily, in the way it did in Mary, nor did they conceived of the Holy Ghost, in the way that Mary did” (Hom. super Missus est, III, 2; PL CLXXXIII, 72). St. Peter Chrysologus writes: “Thou hast found grace. How much? As much as he had said previously: to fullness. Indeed, a fullness of grace which emptied itself in a heavy shower and flooded the whole creature” (Sermo 142; PL, LII, 579).

Not only is Mary full of grace, but she is the mediatrix of grace. She mediates grace to us. earlier I mentioned that St. Thomas Aquinas said: “she received within her Him who is full of all grace; and, by bringing Him forth, she in a manner dispensed grace to all.” Because Christ came to us through Mary, therefore she dispenses the gifts of God to us by giving us Christ. She is a creature, but she dispenses the gifts of God, including gifts of grace.

When Mary appeared to St. Catherine Laboure in 1830 in the chapel on the Rue de Bac in Paris, she announced to St. Catherine that she was the Immaculate Conception. She ordered Catherine to have a medal struck which came to be known as the Miraculous Medal. It is formally called the Medal of the Immaculate Conception. The medal is a sign of Mary’s promise to dispense graces to those who wear the medal and ask for the abundance of God’s grace which He wishes to give us through her. 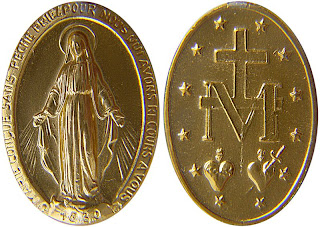 This medal of the Immaculate Conception raised the awareness of a disputed doctrine in the Church. The doctrine of the Immaculate Conception had never been formally defined. So, Pope Pius IX began to circulate a request that all bishops in the world consult with each other and the people to come to a definitive doctrine on this point. The doctrine was not doubted, but the details had not been defined. On December 8, 1854, the dogma was proclaimed: “The Blessed Virgin Mary, in the first instant of her conception, by a singular grace and privilege granted by Almighty God, in view of the merits of Jesus Christ, the Savior of the human race, was preserved free from all stain of original sin.”

It is said that because Mary is Immaculate, the devil cannot see her. She is invisible to him, therefore he is terrified of her. She is the woman whose seed crushes the serpent’s head. This Solemnity celebrates the crushing of the serpent’s head. In fact, every time Mass is offered, the serpent is crushed. Every time a sinner receives absolution in the Confessional, the serpent is crushed. Every time someone genuflects before the tabernacle; or calls upon the name of Mary, or prays the Rosary, or wears a scapular or Miraculous Medal, the serpent is weakened. Jesus Christ is always the victor. And He keeps his Mother at his right side. If we venerate her Immaculate Heart, pray to her for her intercession, ask her to dispense God’s graces to us, God will listen to her. She will shower us with the graces of heaven and protect us under her mantle. God preserved her from the beginning and with her Immaculate help, we will never be parted from Him.