Turning Toward the Lord

Having spent a couple of fun-filled posts looking at some really bad music for some liturgical-disaster-area Masses, let's turn now to an edifying article by Shawn Tribe at The New Liturgical Movement. The article is entitled "'Orienting' The Sacred Liturgy".


Typically when we speak of "orientation" within the sacred liturgy, we naturally turn to a consideration of how the priest and people are situated in relation to the altar -- most especially as traditionally expressed by the shared, common direction of the same. This focus isn't merely a matter of style of course, but rather a consideration of the practical and theological import of this liturgical expression -- not to mention its rootedness in our tradition. The theological aspects have been amply detailed by the likes of Cardinal Ratzinger and Fr. Uwe Michael Lang, touching on themes pertaining to the emphasis of meal versus sacrifice, on the priest as the point of focus and the problem of the community as a self-enclosed circle versus a divine focus and orientation wherein the community gathers to worship God, led by the priest who acts in persona Christi.

He goes on to suggest that


…we can extend this to other aspects of the sacred liturgy as well... For example, good and appropriate sacred music (such as Gregorian chant or sacred polyphony for example) also has an "orienting" aspect. It too has the ability to orient us toward the divine and into an attitude and disposition of divine worship.

And not only music, but also the architecture of the church, the vestments used – any aspect of the liturgical arts – can “[t]hrough their beauty, dignity and nobility…likewise orient us and draw us through their beauty toward the divine”. 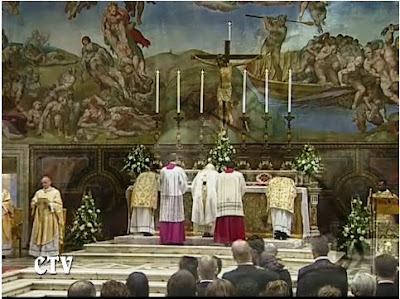