While we’re on the subject of liturgical abuses during Holy Week (see yesterday's post on Holy Thursday), let’s consider another issue that seems to come up with some regularity: “concelebration” at Good Friday's Liturgy of the Lord's Passion. 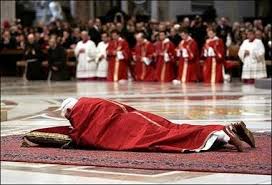 Last year, Fr. Z featured this question from a reader of his blog:

There is a big debate happening among some of us concerning the vesture for the Liturgy of the Passion on Good Friday. On one side the camp, there is the argument that ALL priests in attendance should vest in chasuble, as if for Mass. I am in the camp that argues that there is no need for that, since there is precisely NO Mass. Hence, the “celebrant” only needs to vest while the others can be as in choro. I see that the Liturgy at the Vatican uses this model; while the liturgy at Westminster Cathedral preferred the former….  What say you?

It isn’t Mass.  There can’t be concelebrants in the same sense.  There seems to be no reason for anyone other than the sacred ministers immediately concerned with the ceremonies to be in sacred vestments.

Let all others be in choir dress.

Concelebration in the Roman Rite is limited to Mass. On Good Friday, there is no Mass – only a Liturgy of the Word, a Liturgy of the Veneration of the Holy Cross, and a quasi-Liturgy of the Pre-sanctified Gifts...but no Mass per se: the bread and wine is not transubstantiated into the Body and Blood of Christ (indeed, there is neither wine nor Precious Blood); it happened the night before at the Holy Thursday Mass.

Bishops and priests can also take their cue from St Peter's Basilica in the Vatican: despite the presence of numerous deacons, priests, monsignori, abbots, bishops, archbishops, cardinals - ONLY ONE is vested in sacred vestments: the Holy Father himself, as well as his deacons. Doesn’t it make sense to follow the Holy Father’s example – even if “this isn’t Rome”?

Fortunately, some places do get this right. Others - like the Archdiocese of Chicago - get the principle correct, but flub the application: "The liturgy for Good Friday makes no provision for any form of concelebration, since it is not Mass. Assisting ministers, however, including priests, may be vested." Right: it’s not Mass. Why, then, would other priests present at the celebration be vested as if for Mass?

The ignorance of attending clergy who attempt to "concelebrate" at a Good Friday Liturgy of the Lord's Passion is glaringly on display when they vest as if for Mass: alb and (at least) stole, if not also chasuble...in addition to the bishop or priest who is "presiding" at the day's Liturgy.

One priest I know admonishes his brother priests in this manner:

No, Father: if you're going to be in attendance at all (which, incidentally, is a good thing), the only appropriate attire is what the Church calls "proper choir dress": cassock/soutane and surplice (use of biretta is optional). If you don't have these requisites of priestly attire because you can't afford them (?), or are too lazy to acquire them, or you disdain wearing the proper vesture of a Roman Catholic cleric, then you have no place in the sacred Liturgy - either in the sanctuary, in the choir/chancel, or in the nave. If you're not willing to dress appropriately - according to the mind of the Church - in the vesture of a member of the clergy, then why did you accept ordination at all? - to do only those things you felt like doing?

Indeed, a priest, at his ordination, promises to celebrate the liturgies of the Church according to the Church’s tradition, not his own whim.  Note this passage from the Rite of Ordination of Priests:

124 After the homily, the elect alone rise and stand before the Bishop, who questions all of them together in these words:

Dear sons, before you enter the Order of the Priesthood, you must declare before the people your intention to undertake this office....

Do you resolve to celebrate faithfully and reverently, in accord with the Church’s tradition, the mysteries of Christ, especially the sacrifice of the Eucharist and the sacrament of Reconciliation, for the glory of God and the sanctification of the Christian people?