The source of the following excerpt is: The Sermons of St. Francis de Sales for Lent. This is from the sermon for Palm Sunday. This particular sermon is available online here; I’ve excerpted only a small portion of it for this post. 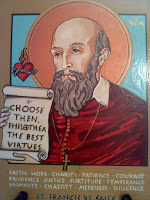 I do not well recall what I said to you in the past on this topic of Our Lord's entry into Jerusalem. [Matt. 21:1-9]. But I thought I would speak today on the reasons for Our Lord choosing both an ass and a colt for this royal entry… I will speak of only three today…The first is the animal's humility; the second, its patience; the third, its willingness to be burdened.
…
The first is because of its humility. The ass, though heavy, sluggish and lazy, has great humility. It is neither proud nor vain; in this it is unlike the haughty horse. Is not a vain and proud man compared to a horse [Ps. 31 (32):9], which is fiery and arrogant? Not only does it kick, but it also bites, and is sometimes so furious that none dare approach it...

Now Our Lord, who was humble and came to destroy pride, chose not to use this proud animal to carry Him. He chose the most simple and the most humble of all animals because He so loved lowliness and humility that only a humble mount could serve Him. God dwells and abides only in the simple and humble of heart. [Is. 57: 15]. Wishing to show His esteem for this virtue, He chose lowliness and abjection for the day of His triumph. He emptied and humbled Himself. He would not have been humiliated and despised by others except He willed it. He Himself emptied Himself, choosing abjection. He who was the Father's equal in all things, without ceasing to remain what He was, chose to be the reproach and outcast of the people. [Ps. 21 (22):7; Is. 53:3]. Though humbled in this way, He nevertheless could affirm His equality with the Father and the Holy Spirit, for He was, with them, one Substance, one Power, and one Wisdom. Nor did our Blessed Savior do a disservice to the truth when in the very depth of His contempt and humiliations He said: "The Father and I are equal in power; the Spirit and I are equal in goodness. We are but one Power, one Wisdom, and one Goodness." For in all ways They were equal. While in this glory, He humbled Himself, in entering Jerusalem not on a horse or other conveyance, but on an ass and a colt, which were covered only with the poor mantles of His Apostles.

It is of this great triumph of humility that Isaias [Is. 53:3; 62:11] and Zacharias [Mch. 9:9] sing, along with that divine poet, the royal prophet Davidl4 [Ps. 45:6, Heb. & Sept.]: He emptied and abased Himself; He humbled Himself; He came mounted upon an ass and a colt. He bent His bow and darted His arrows of love into the hearts of the people of Israel. All were moved at His coming and sang: Hosanna, blessed be the Son of David, blessed is He who comes in the name of the Lord; glory be to the Most High. [Ps. 117 (118):26; Matt. 21:9]. His gentleness and humility captivated all their hearts. Had He come on any other conveyance He would have frightened them. This is the first quality that made the ass appropriate for Our Lord's use on this occasion: its humility.

The second quality is its patience. Not only is the ass humble, it is exceedingly patient, allowing itself to be beaten and maltreated without ever forgetting its origin. [Is. 1:3]. It neither complains, nor bites, nor kicks. It endures all with great patience. Our Lord so loved patience that He wished to become its mirror and pattern. He endured scourging and ill treatment with invincible patience; He supported so many blasphemies, so many calumnies, without saying a word.

Now humility and patience have such an affinity with one another that one can hardly exist without the other. He who desires to be humble must be patient enough to endure the contempt, the censure, the reprehensions that the humble suffer. Likewise, he who desires to be patient must be humble, because one cannot long support the labors and adversities of this life without the humility which makes us gentle and patient. Finding these two qualities in this animal, Our Lord chose it rather than any other for His entry into Jerusalem.

The third reason is that this animal is obedient, permitting us to burden it as much as we want without offering any resistance. It carries the load with remarkable submission and suppleness. So much did our Divine Master love obedience and suppleness that He Himself chose to give us an example of it. So He bore the heavy burden of our iniquities and suffered for them all that we had merited. [Is. 53:4ff.]. Oh, how blessed are they who are supple and submissive, who allow themselves to be commanded as others wish, subjecting themselves to all kinds of obediences without reply or excuse, supporting with good heart the burden imposed on them! Only when clothed with these qualities of humility, patience and submission can we be worthy to carry Our Lord. Then the Savior will mount upon our hearts and, as a divine riding master, conduct us under His obedience.

Having chosen the ass to carry Him into Jerusalem, Our Lord sent two of His disciples to a little village which was close by, saying: Go into the village, loose the ass and the colt, and bring them to Me; if anyone says a word to you, say, "The Lord has need of them." Hearing this, they left at once and went where their good Master had sent them. They loosed the ass and the colt and led them to Him.

…I love and admire [these disciples] very much because they were extremely simple and perfectly obedient in making no reply. They could have replied: "Indeed, You order us to bring You these two beasts, but how will we know which two You want; are there only these two? Will we be allowed to take them?" and many other such objections which human prudence could have suggested. Certainly, there are those who make so many reflections, see so many aspects, find so many interpretations, that they make a thousand replies to all obediences given them. We find no submission in them. They live in perpetual disturbance. On the contrary, these Apostles went without making any reflections, because they were obedient and loved obedience. It is a sure indication that one does not love the command when one reflects incessantly on it. I have already spoken about all this at other times. I remember giving you the example of Eve, who raised so many difficulties concerning the prohibition against eating the fruit of the tree of knowledge. To the serpent she said: "Oh, God has forbidden us to look at or touch this fruit" [Gen. 2:17; 3:1-3], implying that it was an unreasonable, harsh, and difficult command to observe. Certainly, one who has no love for obedience never lacks reasons for avoiding its fulfillment or for lamenting its difficulty. If a person like this is advised to receive Communion frequently, "Oh," she will think, "what will people say if they see me communicate so frequently, or go to confession so often, or make meditation every day? Oh, what will they say?" Simply go and do what the Lord commands!

The Savior knew, of course, that the Apostles would meet people who would question their taking these animals and what they were going to do with them. So it happened that not only did the owner question them, but the neighbors meddled in as well. Anticipating this, Our Lord said to them: If anyone tries to prevent your bringing them to Me, say that the Lord needs them, and he will let them go. With these words from their good Master, the Apostles left. To those who tried to prevent their taking these animals they replied: The Lord needs them; and the people let them go. [Mk. 11:3-6]. Indeed, I love the people in that village for they were very courteous; they no sooner heard that the Lord needed their beasts than they willingly let them go.

The Apostles led the ass and colt to Our Lord. We must note that He deliberately told them to loose them and lead them to Him. If we wish to go to our Savior, we too must allow ourselves to be loosed from our passions, our habits, affections and the bonds of sin which keep us from serving Him. This ass and colt had only the Apostles' cloaks laid on them; then Our Lord mounted them; and in this abjection and humility He made His triumphal entry into Jerusalem. In this He confounded the world, which overthrows all the maxims of the Gospel, relishing neither humility nor abjection. It never ceases to say: "Unfortunate are the poor and suffering. But how happy that wealthy one is!" "Why do you find him happy?" "Because his barn is full of grain and his cellar is full of wine. This girl is also happy because she too is rich, well dressed and covered with jewels." Others are considered happy because their hair is well curled or daintily braided, or they have a fancy gown. How childish all this is! Nevertheless, these are the kinds of people the world considers happy and fortunate. Our Lord turns all such ideas upside down today by His entrance into Jerusalem. He in no way acts like princes of the world, who, when entering a city, do it with much pomp, show and expense. He chooses no other mount but an ass covered with the worthless and poor cloaks of His Apostles. Oh! how blessed are they whom our Divine Master chooses to carry Him, who are covered with the Apostles' cloaks, that is, clothed with apostolic virtues, which render them worthy of bearing our dear Savior and of being led by Him. Blessed are they who conduct themselves here in lowliness and humility. They will be exalted in Heaven [Matt. 18:4; 23:12; Lk. 14:11; 18:14]. Their patience will win for them perpetual peace and tranquility; for their obedience they shall receive a crown of glory [Tab. 3:21; James 1:12]; finally, they shall be covered with the hundredfold of blessings in this life and shall bless the Father, Son and Holy Spirit eternally in the next. May God give us this grace. Amen.