This is a great homily from Fr. Michael Rodriguez for Passion Sunday. It’s long – almost 40 minutes – but important. I’ve summarized it below, but I know I haven’t done it justice. You’ll be greatly rewarded if you find time to listen to it in its entirety!


Fr. Rodriguez opens his homily by reading from the visions of Venerable Anne Catherine Emmerich and her description of the sufferings Jesus will have to endure. There are four great sufferings Our Lord has to endure:

Our Lord’s awareness of these future sufferings made His experience all the more painful and sorrowful. Fr. Rodriguez draws particular attention to the description of the abuses Our Lord has to endure in the Blessed Sacrament – the offenses and outrages committed against Him there.

Here’s a sample – I’m not sure if Fr. Rodriguez actually read this section, but it at least gives the flavor of the vision (I found it here):

…Angels came and showed Him, in a series of visions, all the sufferings that He was to endure in order to expiate sin; how great was the beauty of man, the image of God, before the fall, and how that beauty was changed and obliterated when sin entered the world...

The soul of Jesus beheld all the future sufferings of His Apostles, disciples, and friends; after which He saw the primitive Church, numbering but few souls in her fold at first, and then in proportion as her numbers increased, disturbed by heresies and schisms breaking out among her children, who repeated the sin of Adam by pride and disobedience. He saw the tepidity, malice, and corruption of an infinite number of Christians, the lies and deceptions of proud teachers, all the sacrileges of wicked priests, the fatal consequences of each sin, and the abomination of desolation in the kingdom of God, in the sanctuary of those ungrateful human beings whom He was about to redeem with His blood at the cost of unspeakable sufferings. The scandals of all ages, down to the present day and even to the end of the world — every species of error, deception, mad fanaticism, obstinacy, and malice — were displayed before His eyes...

Fr. Rodiguez devotes the second part of his homily to three topics: 1) obedience, love, and prayer for our new Holy Father; 2) the grave crisis in the Church today; and 3) the importance of each of us making reparation for sins. On the first point, Fr. Rodriguez notes that all Catholics are required to pledge obedience to our new Pope, to try to grow in love for him, and to pray and sacrifice for him. Why? Because of our love for Our Lord Jesus Christ; the Pope is the Vicar of Christ, and so we have a unique love, obedience, and devotion to him.

However, this obedience and love takes place in a context: we are required to obey God’s Commandments and the Traditions of the Church. As the Vicar of Christ, the Pope also stands for these things – he is not separate from them.

The second point in Father’s sermon is the fact that the main issue in the Church today is the grave crisis in which we find ourselves. While we should certainly have joy in the election of a new Holy Father, we must not lose sight of the fact that there is a crisis. The vineyard of the Lord is devastated: there is a loss of faith, of a sense of  the supernatural. The new Pope is being called to correct the crisis.

Cardinals, bishops, and others are offering many commentaries on the new Pope, but, says Fr. Rodriguez, “not too many are weeping over the wounds of Holy Mother Church and everything she is suffering.” We need to pray for the Pope because he has his work cut out for him. “In practically every parish in the world, the Catholic faith has been lost and lessened.”

The evidence of the devastation is the fact that Church dogma and doctrine are not being taught any longer. Fr. Rodriguez offers a list of the truths that seem to have gone missing:

What sense is there in talking about the election of the new Pope if we don’t acknowledge the reality of the crisis, and recommit ourselves to fight for our Catholic identity and the truths taught by the Church? According to news reports, says Fr. Rodriguez, the vast majority of cardinals seem to use as their priority for selecting a pope, the likelihood that he would deal with the reform of a corrupt Roman Curia – all the while expressing the notion that more collegiality is needed.

Fr. Rodriguez contends that there is corruption in the Roman Curia because of the loss of faith. Why point solely to the Roman Curia? he asks. Shouldn’t these cardinals be thinking about their own diocesan curia back home? The same devastation of faith that seems to be taking hold of the Roman Curia exists in every diocese in the world.

Cardinals, suggests Fr. Rodriguez, should make every effort to bring about reform and restoration of the faith in their own backyard. They should make sure their priests are preaching the truths of the faith. It is hypocritical to talk about corruption in the Roman Curia without also talking about the corruption in dioceses everywhere. 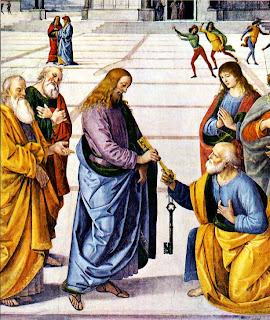 Fr. Rodriguez uses this loose analogy: the foundation of the Church is Peter – the rock. A false foundation has been laid in the post-conciliar period; it’s supposed to be “new” and “better”, but this new foundation is cracked and falling down. The Church doesn’t need collegiality, he concludes. The Church needs “greater love, fidelity, respect, honor, and prayer for the Vicar of Christ. The Church needs a rock-solid papacy.”

Our Lord Jesus Christ gave the keys to the Kingdom to Peter and his successors; he didn’t make 12 sets and give one set to each of the Apostles; he didn’t break up the one key and divide it amongst them. When it comes to dogma, “collegiality” is only one small part; the greater part is the papacy.

In all the hoopla about the election of the new pope – which is a good thing – we must not lose sight of the devastation in the vineyard. And that brings us to the third point: reparation.

Fr. Rodriguez returned to the point that we must look to ourselves and not just point fingers at the Roman Curia. Bishops and priests must pay attention to and make reparation for abuses going on in their own dioceses and parishes. And the laity too must make reparation.

The two areas where the abuses are most rampant and dangerous are in the Holy Sacrifice of the Mass and in the attitude toward the Eucharist. Fr. Rodriguez reminds us of the beginning of his homily, where he read from the vision of Venerable Sister Anne Catherine Emmerich, in which she describes the horrible abuses of the Sacrament that Jesus Christ must suffer. He exhorts us to make reparation for the abuses that occur in the liturgy and against the Blessed Sacrament by being more reverent in our own actions. He suggests that we offer our Holy Communion for all those who are receiving unworthily, and for other sacrileges that are being committed against the Eucharist.

We should also pray for the restoration of the Traditional Latin Mass, Father reminds us.
Fr. Rodriguez mentions the sermon in which Pope Francis said he was dreaming of a Church that is poor, and that is for the poor. While acknowledging that that is an admirable thought and sentiment, Fr. Rodriguez notes that he himself would dream of and long for a Church that seeks the Glory of God above all things, and the salvation of poor souls; and insofar as poverty is a powerful means to achieve that, so be it.

And in the TLM, Fr. Rodriguez maintains, that is what the Church is doing: give glory to God and saving souls. Those are the goals of the Traditional Mass. The Novus Ordo, on the other hand, he says, “was not fabricated with those goals in mind. The motivation was active participation of the faithful, and an effort not to offend non-Catholics.” With these motivations, we cannot expect the Novus Ordo to achieve what the TLM can achieve, even when the NO is said with reverence and devotion.