Homily for the Feast of St. Joseph: Fr. Andersen

The Solemnity of St. Joseph, Spouse of the Blessed Virgin Mary

St. Joseph was the virginal husband of the Blessed Virgin Mary. Both of them were virgins. Their marriage was virginal. They did not exercise the use of their marriage. Their marriage was not ordered towards the procreation and education of offspring in the same way that others are. And yet, there is a child that is the fruit of this marriage. The Child is God made incarnate of the Blessed Virgin Mary by her spouse the Holy Spirit. So Mary is the spouse of the God in the person of the Holy Spirit. She can only have one spouse, so St. Joseph stands in the place of God the Bridegroom in a unique way, but a way that is similar to how every man who marries a woman sacramentally, stands in the place of Jesus Christ the True Bridegroom of every true sacramental marriage. St. Joseph is truly her husband, but in a virginal marriage because she can take no other husband according to the flesh, having conceived once virginally through the Holy Spirit. She remains a virgin. St. Joseph remains a virgin. (note: some traditions say that St. Joseph was older and had children from a prior marriage from which he was a widower. Others maintain that he was a young man and a virgin).

So whose child is Jesus? Is Jesus only the son of Mary? What about St. Joseph? Is he the father of Jesus? Or merely the foster-father of Jesus? We can look at any mother and father and see that they cooperate with God to bear children. They do not create their children. Only God creates. Only God can create something out of nothing. Man can only pro-create. He creates with God by cooperating with God. But God is the primary factor in the creation of every human soul. God alone can create a soul out of nothing. Therefore God is the true Creator of all children through the cooperation of their parents.

St. Joseph did not cooperate in the conception of Jesus. He did cooperate in the fatherhood of Jesus as any man does with the children that are born into a marriage. St. Joseph and the Blessed Virgin Mary were married with the blessing and command of God.

God took on human flesh in the Incarnation. The marriage of Joseph and Mary was entirely ordered toward the Incarnation. There is no other purpose for their marriage (cf. Mueller, The Fatherhood of St. Joseph. p. 139). St. Joseph is the virginal father of Jesus. He is not the natural father of Jesus. Yet, he cooperated with God in the process––not physically––but morally and spiritually through his own virginity (cf. Mueller, 141). Mary conceived only by the overshadowing of the Holy Spirit upon her. So she cooperated morally and spiritually in the conception of Jesus while retaining her virginity. St. Joseph became the father to the Son of God through obedience to God by entering into the marital contract.

“According to the well-known words of the Apostle [St. Paul] and the generally accepted juridical views, the body of the wife belongs to the husband with a view to the procuring of a new life, the lawful fruit of the womb belongs not only to the wife but also to the husband, even if he did not cooperate physically in the conception” (Mueller, 143). But St. Joseph did cooperate spiritually and morally by offering to God his own virginity and his own fidelity: to guard and protect, and to provide for his wife and his Child; and to educate the Child.

“According to St. Augustine, St. Thomas [Aquinas] and other great theologians, the virginal marriage between Joseph and Mary was ordained by God toward the incarnation of the eternal Son of God in such a manner that the child Jesus would be the proles, or the offspring, of this marriage. It is generally agreed that the fruit of a marriage can be only a child who is a result of that marriage and to whose origin or existence both husband and wife have cooperated in their respective manner. For as St. Thomas well says, a child conceived in adultery, or a child unrelated to that marriage and adopted later, is obviously, as all agree, not a proles of that marriage. But since the child Jesus is the proles, the offspring of the virginal marriage between Joseph and Mary, therefore Joseph and Mary have, both of them, cooperated dispositively to bring about the human existence of Jesus, not Mary alone, but also Joseph: for what is done unilaterally by one spouse cannot be ascribed to the marriage as such. Now St. Joseph did not cooperate as a physical cause; therefore it was a moral dispositive cooperation on his part” (144-145). 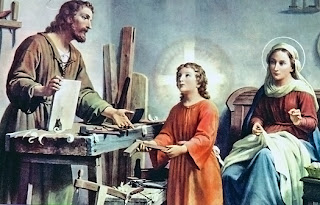 “Mary and Joseph cooperated by contracting their virginal marriage, by their mutual chaste marital love, by their holiness culminating their total obedient surrender to God, and by doing so, they supplied the condition, or better, the disposition, with which by God’s all-wise, merciful decree the incarnation of his Son in the purest womb of Mary was irrevocably bound up, just as in the natural order the production of a new human life is bound up with marital intercourse. Thus the child Jesus, as proles of that virginal marriage, was truly the child of husband and wife, of Joseph and Mary, and as Mary was the mother, so was Joseph in a true sense, even if only analogous, His father” (145).

As Jesus gave His own mother to the disciple, so St. Joseph is given to us also as father. Let us turn to St. Joseph for his fatherly love and care. He is a guardian, a provider, and an educator within the Holy Family. Let us ask him to guard, provide, and teach us. He has done so. He will do so in a way beyond what we ask for because he is so precious to God and God grants to St. Joseph what he asks on our behalf. But Joseph answers prayers as a father. A father does not give his children what they ask for if what they ask for is not good for them.  He knows better than we do what we need. St. Joseph obtains for us what we need which is always better than what we think we need. But we need to ask St. Joseph for a lot. Ask him for what you want. Ask him for an abundance of what you want and then wait and trust. He will obtain what God wills to give us in abundance if we ask him. Let us now turn to St. Joseph and ask him on this his Solemnity for his protection and prayers: